We wanted to introduce you to our friend George the duck! He comes to visit us every day on boys camp and we love feeding him bread! Isn’t he so beautiful!

During elective period some boys are hard at work practicing in the Theater for their production of AVENGERS- the musical! What is so special about this play is that it was written and is being directed by two former campers who are now part of our staff! We are so excited to watch it next week!

We had lots of socials last night on camp. The sophomores hosted the girls for some music and dancing in the socail hall. The junior boys went to girls camp for some fun games of gaga and T.P.

The seniors had a dance party in the arena on boys camp followed by canteen! 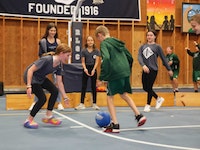